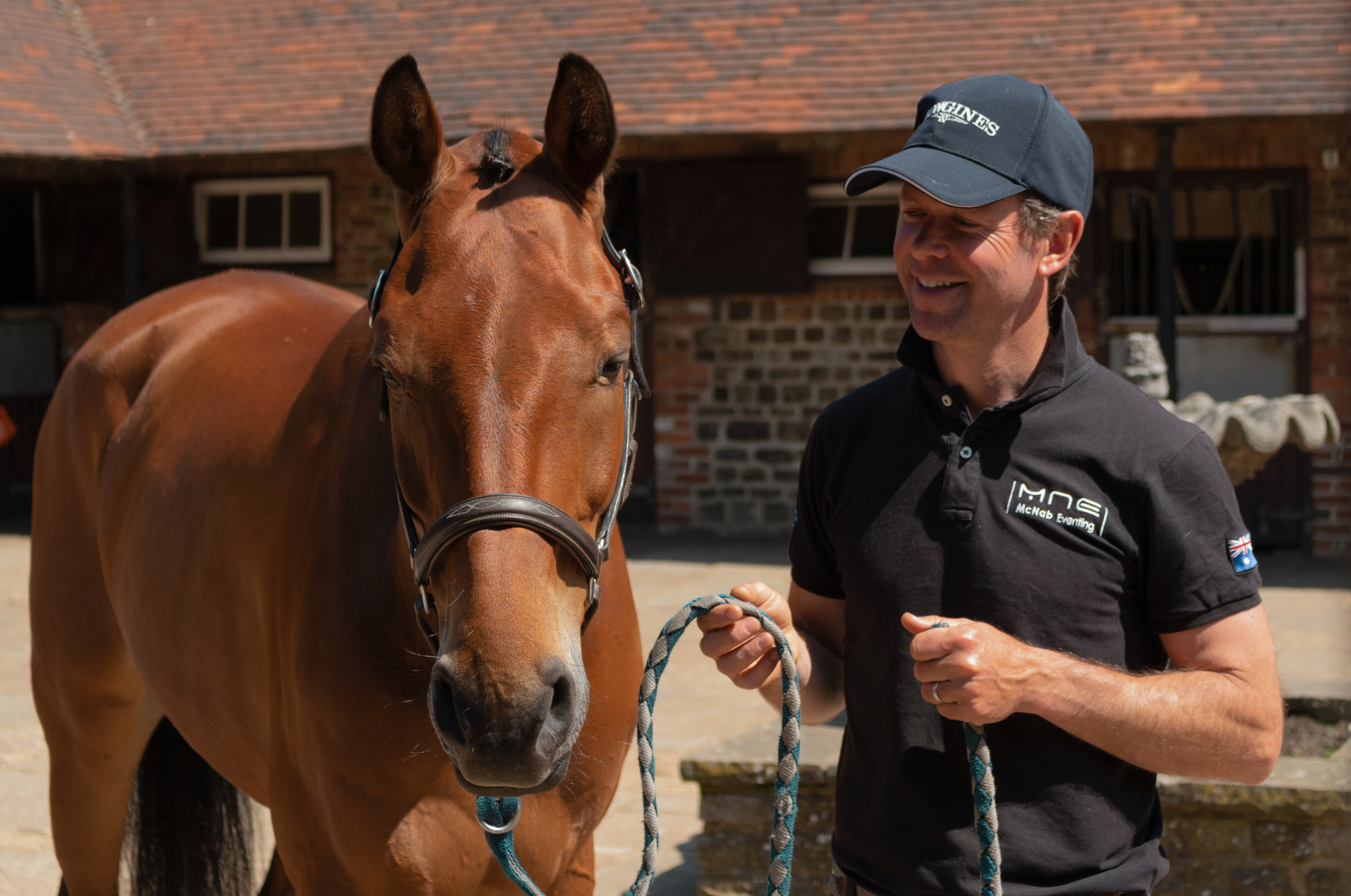 from Tokyo to the Pratoni del Vivaro

After winning a silver medal at the Tokyo Olympic Games, Australian rider Kevin McNab and his horse Scuderia 1918 Don Quidam are now ready to compete in the Eventing World Championships at the Pratoni del Vivaro. Leader of the eventing FEI/WBFSH ranking for the 2019/2020 season thanks to the continuity of his excellent results, Scuderia 1918 Don Quidam confirms his status as one of the very best eventers on the international circuit.

His development and sporting career

Scuderia 1918 Don Quidam’s story began in Wijhe, near Zwolle, where he was born in 2008. The seventh of Nairoby’s ten offspring, he was bred by J.M. Schurink who for his chestnut mare had chosen Quidam, a Holstein stallion born in 2000 sired by Quinar and approved in Oldenburg, with a successful sporting career in Germany. Born in 1985 Nairoby out of Amethist, was a large broodmare belonging to a line of thoroughbred mares that could boast only a few dressage competitions. After starting his sports career in The Netherlands, Don Quidam arrived at Dunbog one of the most respected stables in Scotland, owned by the Oakdens, a well-known family of international eventers. He had been imported by Stephanie O’Neil who sold him as a 5-year-old to the then young rider Katherine Lindsay who was taught by James Oakden. And it was ridden by Katherine Lindsay and James Oakden that Don Quidam made his debut in his first novice classes, immediately impressing everyone thanks to his temperament. They had all been right!

Others too sensed his potential, however, including Kevin McNab and the Scuderia 1918 team, who in 2017 bought him from Hannah Bate who had in the meantime taken the horse to international level. “I saw Scuderia 1918 Don Quidam for the first time at Hannah Bates’ stables – says the Australian top rider – having gone there to see another horse she had for sale. That horse was not what I was looking for, so Hannah’s husband Paul told me they another seriously interesting horse and that he might have been able to persuade his wife to sell it. I didn’t know the horse well but had seen him compete in the Blenheim 3*. Don, the stable name Hannah’s had given him, was not for sale but in the end she agreed to let me try him out. I really liked the horse and furthermore he had already competed in important events and I was persuaded that it would be a great opportunity to have a horse ready to move forward on. I discussed this with Francesca Pollara, Scuderia 1918’s eventing horses scouter. The horse was bought after it had been proposed to Scuderia 1918 and I was obviously delighted and started to ride him in the summer of 2018.” Don Quidam has never disappointed our expectations since becoming a member of Scuderia 1918’s team, thanks to a crescendo of excellent performances and results at international eventing’s most prestigious and difficult venues.

Thanks to his technical capabilities, his experience and extraordinary sensitivity, Kevin McNab has in fact brought out the best qualities his bay has, establishing perfect syntony with his special personality forming an extraordinary and very close pair. It is this syntony that last resulted in their being selected to compete for Team Australia in the Tokyo Olympic Games. Initially selected as the reserve horse and rider combination, Kevin and Don Quidam instead became part of the team following the withdrawal of Stuart Tinney, thereby providing an important contribution to the team’s silver medal and finishing with an excellent individual 14th place.

A year after the Tokyo Olympics, Kevin McNab and Don Quidam have been selected by Equestrian Australia to compete in the FEI World Championships held at the Pratoni del Vivaro from September 14th to September 18th.

We wish Kevin and Don Quidam all the best as we do to all the horses and riders, owners and grooms selected to represent their countries at the Eventing World Championships.

“I’m very honoured that Scuderia 1918 Don Quidam has been selected to represent Australia at the World Championships! Thank you so much to his owners Scuderia 1918 and to Francesca Pollara for coming along on this great journey and congratulations to my fellow Aussies for their selection”