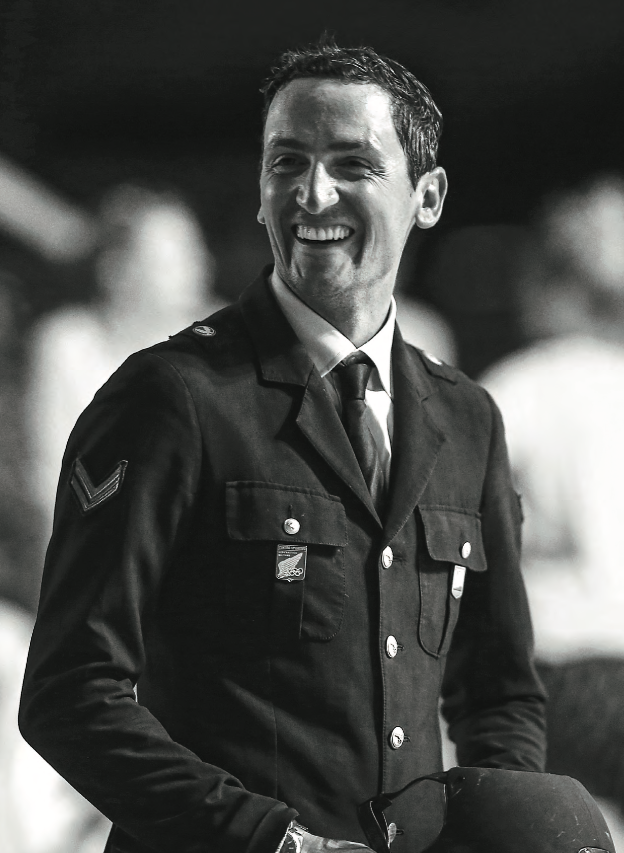 When meeting Lorenzo De Luca one can immediately understand how important a role passion plays in what he does: from the joy with which he does things, from that special light he has in his eyes and the love he shows for his horses. A champion in talent, for his evident elegance, intuition and a spontaneity during competitions, which allow him to become as one with his horses and execute truly spectacular performances.

Lorenzo De Luca was born in Lecce (Italy) on April 23, 1987. As an athlete in the “Centro Sportivo dell’Areonautica Militare” (Air Force’s Sports Division), Lorenzo De Luca obtained second place in Longines FEI Ranking in 2017, the highest position achieved by an Italian rider. To this day, he is the only Italian rider to have competed in the Rolex IJRC Top Ten Geneva (2018 edition, with Ensor de Litrange). Lorenzo won the Rolex Rome Grand Prix at Piazza di Siena in 2018, riding Scuderia 1918’s Halifax van het Kluizebos, a stallion who right under his saddle was nominated number one in the world ranking of the World Breeding Federation for Sport Horses in 2017. In that same year, with Irenice Horta, De Luca obtained an excellent seventh individual place at the WEG in Tryon. In addition to these, there are many wins and placements in CSI and CSIO on the most prestigious international competitions. De Luca he has been living and working in Belgium since January 2015, in Wolverten, as a rider for Stephex Stables. Lorenzo’s life is now between Belgium and Florida, where he spends the winter months to take part in the Wellington circuits and where he lives with his girlfriend Jessica Springsteen.

We interviewed him during this time of pause in the sport’s world, a time which invites everyone to contemplation and resolutions.

After China, Italy was the nation most affected by the virus and, therefore, the center of the world’s attention. Have you been able to follow the evolution of the situation? You move between Florida and Belgium, but your family is in Italy: how do you cope with this? Do you talk regularly? Are you worried?

Well, of course I followed day by day the developing of the situation in Italy, a tragedy that found everyone unprepared. Unfortunately, many people are dead and continue to die. Inevitably there is a lot of concern and being away from my loved ones increases this mood. We talk every day and knowing that they are well reassures me. I hope that scientists and doctors find a vaccine to defeat this invisible monster as soon as possible.

How do you envision the return to competitions? It is impossible to plan in the short term, but what do you see ahead of you after this forced stop? What are the horses you’re going to ride with, the ones you will take chances on, and for which ones, even among the younger, you have longer-term programs?

As much as competing is important for us, I’d say that right now it is superfluous to think about it. When the time comes I will start with a good group of young horses: Malissa, George, Nuance, Kulana and, on the front line, Scuderia 1918 Halifax, Ensor and Dinky Toy.

What impresses you the most in horses? What are you looking for in a horse when you first meet him? What are the qualities that strike you right away? Details, nuances…

Balance, character, carefulness. Character, infact, is what matters most. If a horse understands what he has learned and is willing to stand by us – assuming that we do everything correctly – it’s definitely a top horse.